This blog outlines my first experience of a Twitter Journal Club. I ran it as a module tutor/moderator.


Background
I had never heard of a Twitter Journal Clubs or even Journal Clubs until three weeks ago. I am grateful to Chloe James (@joeyclaims) for introducing me to them. Chloe is a student on my Flexible, Distance and Online Learning module, part of the Post Graduate Certificate in Academic Practice (PGCAP). Chloe regularly participates in a microbiology journal club (#microtwjc). I had participated in Twitter chat clubs i.e. ukedchat however not actively. The event I attended was pretty quiet so I didn’t feel enthused to get involved again. Note to self: give it another go.


History of Twitter Journal Clubs (twjc)
Briefly researching I found that “journal clubs have been around for over a century” (Leung, 2012). This left me feeling ignorant as I’d never heard of them. The first Twitter Journal Club (#Twitjc) is often attributed to Natalie Silvey and Fi Douglas in March 2012, however I found an earlier example. Ves Dimov from Creighton University ran one on an allergies in December 2008.  A Google search today (25 Oct 2013) found 72,000 hits for “twitter journal club”. Many of these reflected the growth of twjc’s in medical disciplines (a list is provided on pfanderson’s blog), but there were some from other disciplines: geology, astronomy, environmental sciences, interpreting, horticulture and information literacy. I even found one twjc which had an audio version of their meeting?!? (I’ve yet to listen to it).


A search for “Twitter journal club” AND TEL revealed twjc’s who had discussed technology use in their discipline area eg evidence based practice nurning and the use of mobile phones. A narrowed search for “Twitter journal club” AND “technology enhanced learning” did not find any twjc’s specifically on TEL. Maybe I should start one?? My enthusiasm says “yes great idea, I’ll start now”, a reality check says “No. Focus on your PhD!”


Benefits of a twjc:
1.       Gives people the opportunity to critically discuss papers in a limited time frame
2.       It is a way to build up networks with likeminded people
3.       For students, if forces them to read the paper in advance of the discussion
4.       For my cohort it, it meets some of our Teaching and Learning Strategy (APSIRES) goals     i.e. accessibility and innovation
5.       For my cohort, it enabled us to practice using Twitter


Drawbacks of a twjc:
1.       Participants need to have a Twitter account, and be able to read and post prior to the event
2.       For my cohort, I was complete novice!


Our class twjc
Most twjc’s are open to anyone, my first twjc was for my cohort though open to anyone. I did invite the authors Marion Commey and John Stephenson to attend. However Marion lives in Vancover, so it would be 01.30 for her. Neither joined us but of course they could have lurked for followed the hashtag. My twjc lasted an hour and ran on Thursday 24th October from 09.30-10.30 BST and discussed Commey and Stephenson’s paper “Online learning: it is all about dialogue, involvement, support and control - according to the research”.


How it was from where I sat (as PGCAP FDOL Module tutor and twjc moderator)?
Any concerns I had about lack of engagement certainly did not materialise! I’d spent quite a while preparing questions to a) get the discussion going, b) ensure we didn’t have any quiet periods and c) ensure we stayed on track. I’d even written tweets describing the background of twjc’s, I then planned to go through the journal section by section. However the discussion, which started with the real core of the article, was underway before 09.30. I loved the enthusiasm and decided to scrap my best laid plan.


I’d say that 80% of the prepared questions were a waste of my time. This was partially due to my inexperience – many questions were too detailed and there were too many. Their redundancy was also due to the enthusiasm from the cohort. However the thought process had been useful and I would certainly recommend having some questions pre-prepared in case things do go quiet and to keep people on track. All the literature has that same message. Some authors suggest publishing the questions in advance so that participants can consider these when reading the journal paper.


In my case I didn’t publish the abstract, my reasons for choosing that article or the questions. Predominantly due to lack of knowledge to do that on my part. By the time I did it was too late!


There were the occasional odd periods of silence during the session. This was a bit disconcerting. I’m sure it was only a few second but it felt like minutes and I was torn – are people thinking or writing, or do they have nothing to say? Shall I use one of my pre-prepared questions? I chose to wait and, true to form, someone tweeted, phew! I found it was the same feeling as when you get when you are in a physical classroom facilitating a discussion and it all goes quiet, though more difficult to read the situation as you can’t read the body language.


Another pre-twjc concern was would anyone say anything offensive about the authors?
If the authors joined us how would they feel? Whether they joined us or not was irrelevant as Twitter is in the public domain. I had a dilemma in my head: do I remind the participants of this being in the public domain and the possibility of the authors being present/reading? Or not? They are professionals they know that I told myself, and we had discussed similar issues in our virtual class two weeks previously. Still I felt I am overwhelming need to protect them from any risk and warned participants. Does that say more about me than them? Possibly I am over-protective?


Would all the cohort engage?
They didn’t. I do not know why that was. Looking down the “register” six people were “absent”. Was it because they did not want to Tweet? Have they left the class? I don’t know but will follow this up. One student had technical issues with Twitter not posting – I still do not understand this. They were doing everything correctly but their tweets did not show in the feed. #bizarre. Chloe had told me that had happened in her twjc.


Did the students actually engage i.e. tweet?
Yes though to varying degrees – as you would have in discussion in a physical class. Analysis in Topsy.com provided some easy and interesting analysis. We had 209 tweets in around an hour. The top tweeter tweets 43 times and the quietest tweeter only tweeting once. On reflection, I could have invited/encouraged the quiet ones to tweet, as I would in a class. I guess the new technology/and following the discussion made me forget.


Was it a critical and reflective discussion?
Yes. Points from the paper were critically discussed. Links to the student’s own positions on Commey and Stephenson’s quadrants were made, and also to our FDOL course position on the quadrant. Really detailed discussion was around the various components of FDOL and where they sat. FDOL did not fit wholly into one quadrant, and neither did the students’ learning preferences. 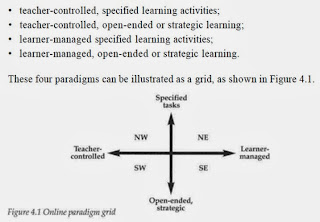 One early question regarding Twitter was: how could we discuss anything meaningful in 140 characters. Personally I think our twjc dispelled that myth and for me had the advantage of not being overly wordy. Personally I remember the feeling of dread when opening my course Moodle discussion board to be faced with many lengthy discussion threads. The proliferation of Twitter Journal Clubs must also add weight to the argument.


How useful was it for the learners?
Having read one blog it looks positive. Great blog, thanks Alex. However for the student who experienced the frustration of tweeting and them not showing, then spending time trying to resolve the technical issues, that was not such a good learning experience. For the other 15 participants I will gather views. One evident positive - it was apparent that most had read the journal article. That was a plus. Though it was impossible to tell if all had.


The only other challenging aspect I had was following the threads of the conversations. Sometimes there was so much being said it felt rather chaotic and it was hard to see which point tweets were referring to which? This was especially true where responses didn’t include the original point, but how can you include the original point when you’ve only got 140 characters to respond. Alternatively there could be an easy way to follow threads and I just don’t know it!


Overall an innovative, engaging and interesting session. A huge thanks to all my students who participated in this new venture and are very understanding of my lack of familiarity with it.


This was made even more exciting by the tweet I received an hour later. This was from another lecturer at another university and read:
@CoachPartington @KennyGreenough @Hugheschr1982 have a look at this #fdoljc the feed is a twitter-based journal club #whatarethechances??


Thanks @StueyTheCoach. Stuey and I are now sharing our interest in twjc’s. :-)


The tweets can all be read at: http://storify.com/g_fielding/pgcap-fdol-twitter-journal-club


Keys to a Successful International Journal Club on Twitter


Twitter in learning and teaching – literature review
Posted by Gillian Fielding at 11:08 AM